You are here: Home » Prayers for the Stolen gets a trailer & poster

MUBI, the theatrical distributor and global curated film streaming service have released the new trailer for Tatiana Huezo’s critically acclaimed Prayers For The Stolen, which will be released theatrically in the UK 8 April 2022, and exclusively on MUBI from 29 April 2022.

From the producers of Roma, Prayers for the Stolen is the debut feature from established Mexican-El Salvadoran filmmaker Tatiana Huezo (The Tiniest Place, Tempestad). Premiering at last year’s Cannes Film Festival, the film was selected to compete in the Un Certain Regard Prize Award where it won a Special Mention. A powerful coming-of-age story set in a rural village dominated by the drug trade and the threat of human trafficking, the film was selected as Mexico’s submission for Best International Feature Film at the 2022 Academy Awards®. 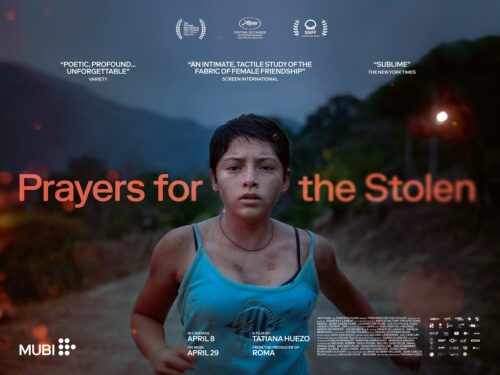 Loosely adapted from Jennifer Clement’s 2014 novel, it follows the lives of three girls in Guerrero whose childhoods are overshadowed by the forceful and violent presence of the local cartel. The film pivots around Ana and her friends, whose worlds are governed by those wanting to turn them into slaves or ghosts. Trained by their mothers to flee at any moment and forced into extreme measures to evade capture, these young women must learn to abandon their femininity in order to navigate their harsh surroundings.

As much a damning indictment of the hidden evils of an unjust war as it is a sensitive depiction of women living in the crossfire of gang warfare, this is an unforgettable story of friendship, family and survival uniquely told from a child’s-eye-view perspective.