Cedar Island Films, Flying Eye Productions and the National Film Board of Canada are thrilled to announce that their documentary about grief and hope in the era of climate change The Magnitude of All Things, directed by Sundance and Genie award-winning filmmaker Jennifer Abbott (The Corporation, The New Corporation; The Unfortunately Necessary Sequel), will host exclusive preview screenings in Glasgow during COP26.

Produced with the participation of the TELUS Fund, Telefilm Canada and the Rogers Group of Funds, through the Theatrical Documentary Program, The Magnitude of All Things draws intimate parallels between experiences of grief—both personal and planetary. When filmmaker Jennifer Abbott lost her sister to cancer, her sorrow opened her up to the profound gravity of climate breakdown. Stories from the frontlines of climate change merge with recollections from the filmmaker’s childhood on Ontario’s Georgian Bay. What do these stories have in common? The answer, surprisingly, is everything.

Featuring interviews with Greta Thunberg, Co-Founder of Extinction Rebellion Roger Hallam, Amazon Rainforest leader Manari Ushigua, the former President of the Pacific Island nation of Kiribati Anote Tong and many other passionate voices on the climate frontlines, this cinematic journey takes us around the world to witness a planet in crisis: from Australia’s catastrophic fires and dying Great Barrier Reef, to the island nation of Kiribati, drowned by rising sea levels. In Nunatsiavut, melting ice permanently alters the landscape, while in the Amazon rainforest, Indigenous people fight a desperate battle against oil and mining extraction.

For the people featured, climate change is not happening in the distant future: it is kicking down the front door. Battles waged, lamentations of loss, and raw testimony coalesce into an extraordinary tapestry, woven together with raw emotion and staggering beauty that transform darkness into light, grief into action. 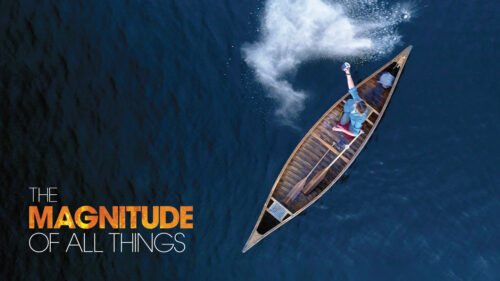 Director Jennifer Abbott said: “It’s unfathomable; even unbearable. How do we face and accept the reality of climate catastrophe? Two screenings of The Magnitude of All Things at Glasgow’s Film Theatre during COP26 invite us to begin that process. The screenings and a livestream conversation with the filmmaker and participants in the film afterwards will create a public space during COP26 for the often neglected emotional dimension of the climate emergency. Collectively acknowledging, witnessing and expressing difficult emotions such as climate grief, eco-anxiety and existential dread is key to their transformation.

But it doesn’t stop there. The Magnitude of All Things screenings and associated events hope to galvanize our determination to engage in the only thing we can now do – resist. Hope is a verb. Action is imperative.”

THE MAGNITUDE OF ALL THINGS is screening at the Glasgow Film Theatre 6th and 11th November during COP26. A livestream Q&A with Director Jennifer Abbott and special guests will take place directly following the screening on November 11th.

Youth Activism in America – Powerful Documentary “The Day I Had To Grow Up” to Premiere at Barcelona Intl. Film Fest