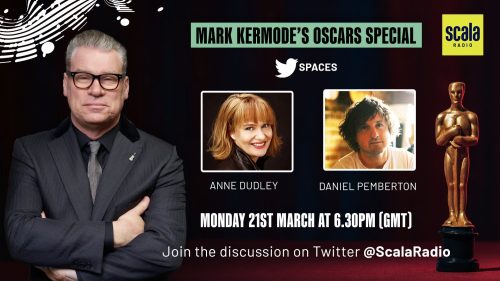 On Monday 21st March renowned film critic Mark Kermode will be joined by composer, keyboardist and founding member of synthpop band Art of Noise, Anne Dudley whose film scores include The Crying Game, Elle and The Full Monty, for which she won the Academy Award for Best Original Musical or Comedy Score. Composer Daniel Pemberton, whose credits include The Trial of the Chicago 7 (for which he received an Academy Award nomination for Best Original Song) and more recently Being the Ricardos (for which he received a BAFTA nomination), and who was named ‘Film Composer of the Year’ by the International Film Music Critics Association in 2021, will also take part.

This very special Twitter Spaces event will bring together Kermode, Dudley and Pemberton to discuss the relationship between music and film, the film scoring process and of course looking ahead at this year’s Oscar nominated soundtracks and the potential winner.

“I am hugely excited to talk with Anne Dudley and Daniel Pemberton, two composers of extraordinary calibre about what the ingredients are of an award-winning score” commented Mark.

Twitter Spaces presents a new and exciting way to have a live audio conversation and the event on the 21st will be Scala Radio’s first ever Spaces, allowing listeners from all around the world the opportunity to engage and hear this unique discussion.

Mark Kermode presents weekly on Scala Radio each Saturday from 1 – 3pm where he brings his love of film and music to the station with his own show looking at the latest films, championing up-and-coming film composers as well as exploring the film scoring process.