You are here: Home » Meet Shaun the Sheep’s new friends

Aardman and STUDIOCANAL Friday announce a partnership with comparethemarket.com’s Meerkat Movies reward to celebrate the release of A SHAUN THE SHEEP MOVIE: FARMAGEDDON opening in UK cinemas on Friday 18th October 2019.

In a new advertising campaign launching on Monday 14th October, the unsuspecting meerkats find themselves transformed into Aardman claymation characters when they head to the cinema to see the new film, meeting family favourites Shaun and the flock and a brand-new mischievous character LU-LA on their adventure. 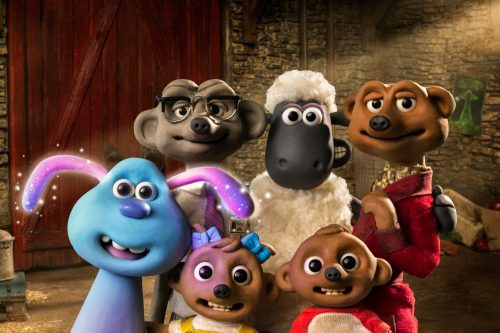 The 20” TV advert will be supported by a comprehensive through-the-line marketing campaign utilising in-cinema, digital, radio and social.

Pier-Paolo Pettineo, Head of Meerkat Movies at comparethemarket.com adds: “In a first for comparethemarket.com, we’ve partnered with Aardman and StudioCanal to reimagine our beloved meerkat family in the iconic style of Aardman Claymation. The new campaign perfectly captures the meerkats enjoying the magic of cinema together as a family, celebrated via Meerkat Movies.”

Stuart Henderson, Head of UK Marketing at STUDIOCANAL said: “Aardman have a long history of using their unique brand of animation to bring to life characters and worlds that audiences fall in love with. Shaun the Sheep’s new movie Farmageddon is no exception, so it’s incredibly exciting to witness the hugely popular meerkat family enter into that world and meet the flock. It’s Sergei, Aleksandr and the meerpups as you’ve never seen them before, in a close encounter of the herd kind.”

Sean Clarke, Executive Director of Rights and Brand Development comments: “The Aardman team has hugely enjoyed welcoming the meerkats into Shaun the Sheep’s world, bringing together two groups of characters who are loved by the whole family. Shaun and flock continue to be some of the most in-demand characters in Aardman’s portfolio as they seamlessly transition between television, films, games, attractions and commercials. We’re pleased that Shaun is joining the illustrious list of movie stars who have appeared in previous Meerkat Movies campaigns. He is keeping good company!”