You are here: Home » Jethica gets a poster & trailer

Lightbulb Film Distribution is delighted to share the poster and trailer for dark comedy-horror, Jethica. 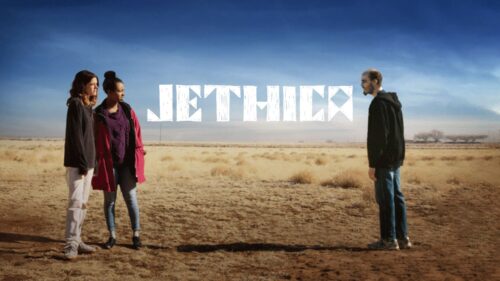 Directed by Pete Ohs, the film stars Callie Hernandez (Under The Silver Lake, The Endless), Ashley Denise Robinson (The Watchman, The Beta Test) and Will Madden (Mean Spirited, The Wolf of Snow Hollow).

Jethica will be released On Demand and Download in the UK & Ireland from Feb 6.

Hiding out in New Mexico after a freak accident, Elena runs into Jessica, an old school friend. But when Jessica’s stalker suddenly shows up at their door, they must seek help from beyond the grave to get rid of him, for good.

“Jethica has such an endearing quality; the offbeat humour, the chemistry between the two lead characters, and Kevin (the stalker), whose skewed perspective allows meaningful conversations between the abuser and the abused. Director Pete Ohs is a visionary filmmaker – an exciting new voice in elevated-genre. We are thrilled to be bringing his latest feature to audiences in the UK and Ireland.” commented Sales & Acquisitions Director, Peter Thompson.

What is happening at Wolf Manor?

What could go wrong in New Orleans?

Can you survive the Slumber Party?