You are here: Home » Hellboy is back

The brand new trailer for the reboot of Hellboy has arrived. This one is a “red band” version. It does contain quite a lot of rude words and violence.

It seems they are trying to go for the edgy Deadpool demographic but it does seem to be heading for a massive miss. Hellboy is crude but if you compare it to the last time he hit the big screen he was more fun & didn’t have to swear and kill anyone that got in his way. Not only that, we have a completely different Nazi back story to start as well as the film being set in London and the rest of the UK.

The other thing that has arrived is the hellish new poster with our hero in full demonic mode. 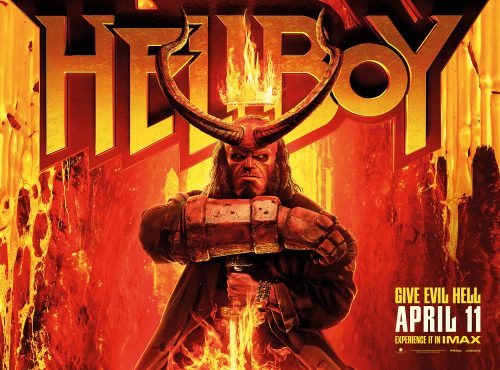 Hellboy is back, and he’s on fire. From the pages of Mike Mignola’s seminal work, this action-packed story sees the legendary half-demon superhero called to the English countryside to battle a trio of rampaging giants. There he discovers The Blood Queen, Nimue, a resurrected ancient sorceress thirsting to avenge a past betrayal. Suddenly caught in a clash between the supernatural and the human, Hellboy is now hell-bent on stopping Nimue without triggering the end of the world.

Hellboy is back & in London!