You are here: Home » Freakscene is coming home

Munro Film is excited to share the new poster for music documentary Freakscene – The Story of Dinosaur Jr. Prepare for musical mastery from one of the most influential indie-rock bands of all time… Following it’s hit theatrical release, the film will be coming to Digital Download on the 22nd November. 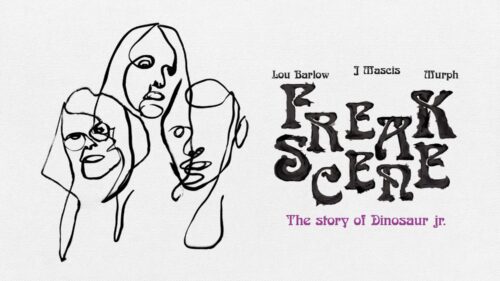 Freakscene – The Story of Dinosaur Jr. is a homage to one of the most influential bands on the American East Coast, inspiring the rock scene. The impact of their legacy reached Nirvana and Sonic Youth in the 1990s – pretty rock n’roll. Their unmistakable sound and style, later coined “Grunge”, paved the way for the “Slacker” culture of Generation X.

The film documents the story of eccentric guitarist and bandleader J.Mascis, bassist Lou Barlow and drummer Murph. Incredibly the band communicate exclusively through the medium of music – choosing not to talk to each other. The film is as much a music documentary as an intriguing fly-on-the-wall insight into the band’s interpersonal relationships and dynamics. This dive into vulnerability provides a contrast to the trademark heavy-metal rock.

Directed by Philipp Reichenheim and subsidised by German Films, the documentary stars the band members J. Mascis, Lou Barlow and Murph. A man of many talents, frontman J.Mascis also produced the film with Antoinette Köster and Stephan Holl. An emotional, tragically funny and sometimes noisy rollercoaster ride by a dysfunctional family, Dinosaur Jr.

Freakscene: The Story of Dinosaur Jr. will be Available on Digital Download from 22nd November. Pre-order now on iTunes

Plan big & hope for the best in Schemers