You are here: Home » A Fistful of Dollars is coming back

The Clint Eastwood classic, A Fistful Of Dollars is coming back to the big screen courtesy of Park Circus.  This time it’s not just a standard re-release.  This one is a wonderfully restored 4K version.  This is your chance to see it in its new glory.

So join the Man with No Name, backed by the classic soundtrack from Ennio Morricone, for another time in UK cinemas.

Not only do we have the trailer for this release, we also have the poster and a nice selection of images, so just scroll down and you can then see them all! 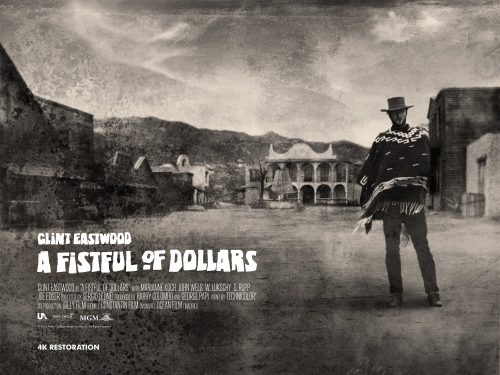 San Miguel is a one horse town that’s being pulled apart by two rival families. John Baxter, the crooked town sheriff with a sideline in weapons smuggling, seeks to establish his own version of law and order with support from his son, Antonio and their gang of thugs. But the Rojo Cartel – headed up by a trio of volatile brothers: Miguel, Ramon and Esteban – have their own ambitions for San Miguel and its strategic position on the Mexican border.

Enter the Man with No Name: a laconic gunslinger for hire who drifts into town and, after learning of of the Baxter-Rojo feud, spots an opportunity. He plays the warring clans off against one another and turns their vendetta to his advantage – but the stranger’s duplicity riles both families, and the vengeful Rojos decide to take drastic action in the battle for San Miguel.

A Fistful of Dynamite hits home