You are here: Home » New research fellow at The National Museum of Computing wins prestigious prize for Colossus research 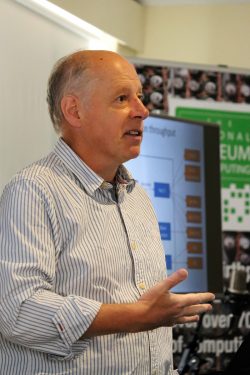 Dr Mark Priestley has been appointed research fellow at The National Museum of Computing on Bletchley Park. His work, which will focus on the early days of computing and the development of programming, has recently won him a prestigious history prize for his paper on the programmability of Colossus.

As a researcher of the history of computing, Priestley’s interests have included the early development of programming languages, the 1940s archives of the ENIAC computer and the work of John von Neumann and his collaborators. He is currently focusing on the 1940s Colossus code-breaking machine bringing to light previously overlooked aspects of its development, operations and impact through research of little studied archives and interviews with surviving Colossus veterans. In October, Priestley won the 2019 Bernard S Finn History Prize for his article “Colossus and Programmability” recently published in the IEEE Annals of the History of Computing.

In welcoming Mark Priestley to the museum, chairman of trustees Andrew Herbert said, “This is our first appointment of a research fellow and demonstrates the rapid maturing of our relatively young museum. Mark’s work is already giving us new and fascinating insights of the early days of computing and such information is being eagerly absorbed by our tour guides and incorporated into our very popular Learning Programme for schools and colleges.

“This year Mark has made a very significant contribution to the history of Colossus by getting under the skin of a well-known story and showing the intense pressure and challenges of the people using the machine and how they strove to optimise the use their new technology at a time of crisis. We look forward to more such revelations from Mark that will extend our knowledge of our unrivalled collection of original and reconstructed machines that trace the development of our digital world.”

Priestley holds a BA in mathematics and philosophy from Oxford University, an MSc in database and information systems from Birkbeck College and a PhD on logic and the development of programming languages. He has worked as a programmer analyst and as head of department in computing and software engineering at the University of Westminster. He has authored several books and many papers on the history of computing.