You are here: Home » Museum volunteer helps win Emmy in his day job

Delwyn Holroyd, a volunteer at The National Museum of Computing, is celebrating the award of an Emmy to the company he co-founded and of which he is now Technical Director. 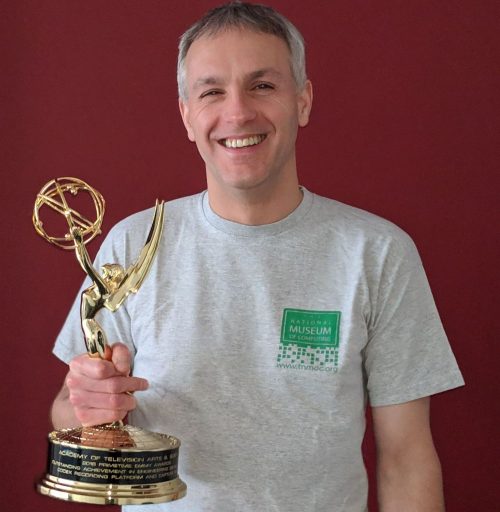 Codex Digital Ltd won an Emmy, an American award for excellence in the television industry, for its recording technology that can be found in TV and film cameras across the world. Described by the Television Academy as an “industry game-changer”, Codex Digital specialises in high-performance workflow systems for feature films, television shows and commercials. It has effectively created a much-needed set of standards for this aspect of the industry and the work of Delwyn was specifically commended by the Academy.

On the weekends, you’ll often find Delwyn at TNMOC maintaining the Harwell Dekatron (WITCH), the world’s oldest original working digital computer, or restoring the ICL 2966 mainframe, the largest machine in the museum.

“Volunteering at the museum helps me unwind from the stresses of my day job,” explains Delwyn. “I am an electronic engineer by training, so the skill-set I have developed can be useful with computers across the decades.”

This year Delwyn celebrates ten years as a museum volunteer and during that time has never shied away from some of the Museum’s biggest projects. In the restoration of the WITCH, he was able to repair its original power supply when it seemed that a modern version would have to be substituted. The You Tube video clip of Delwyn switching on the restored WITCH in 2012 has been seen by more than one million viewers across the world.

Delwyn is currently focused on the huge task of restoring as much of the 1980s ICL 2966 mainframe as is feasible. The size of the machine, which stops every visitor in their tracks when they see it, equates to the size of the restoration task!

Andrew Herbert, chair of TNMOC trustees, said, “The dedication, skills and achievements of museum volunteers never cease to amaze us. Delwyn has contributed his expertise and much time to the museum for a decade and helped create a computer museum that is recognised as one of the best in the world.

“We always welcome new volunteers, but they don’t have to be as skilled as Delwyn! Currently, we’d like to hear from anyone willing to act as a gallery steward and anyone who would like to train as a potential guide. They will have the pleasure of volunteering alongside the likes of Delwyn and the opportunity to help visitors understand one of the most astonishing developments of our time – the emergence of our digital world.”

The next volunteer open days at the Museum are on Sunday 20 January and Saturday 23 February 2019. Find out more here.