You are here: Home » The Bombe arrives at TNMOC 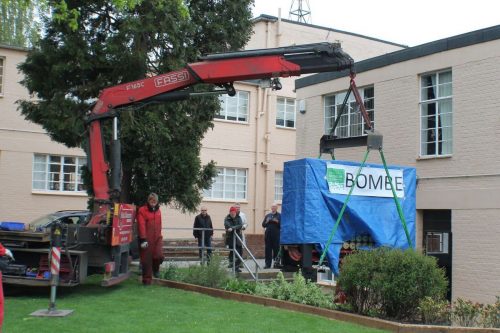 After more than ten hours of tense work, the Turing-Welchman Bombe arrived safely at The National Museum of Computing on Bletchley Park. With air lifts, wheel changes and extremely tight squeezes, the reconstruction of the extraordinary Enigma code-breaking machine edged its way into its new gallery that will soon be open to the public.

The move was made possible thanks to the generous contributions of more than 500 individuals and organisations who donated more than £50,000 in a four-week Crowdfunder appeal ending in March to keep the Bombe on the Bletchley Park Estate.

TNMOC Trustee Keven Murrell who was present on moving day to lend a hand described the tension of the operation: “To transport a one-tonne machine with delicate moving parts over flower beds, up steps and ramps and through the narrowest of gaps and around the tightest of turns was an astonishing feat. Even removing the door frame to the new gallery wasn’t enough to squeeze the Bombe into its new location – last minute judicious handywork was required to create an extra half-a-centimetre of space! As darkness fell, the Bombe finally reached its new home – and not one person dropped the Bombe.”

The move was accomplished by the Bombe team volunteers led by John Harper, a resident TNMOC team led by Jacqui Garrad, and a highly experienced team of removal experts from Flegg Transport.

On behalf of everyone at TNMOC, Andrew Herbert, chair of trustees, said, “It is a real thrill to know that so many people have contributed to the success of the move – from the generosity of the general public to the expertise of the reconstructors. It is a heartfelt tribute from today’s generations to the codebreakers and digital pioneers of the past.”

The Turing-Welchman Bombe was the electro-mechanical device designed by Alan Turing and Gordon Welchman, based on a Polish concept, to automate the deciphering of Enigma-encrypted messages during the Second World War. After years of work, a team led by John Harper finished the reconstruction of the machine in 2007.

The reconstructed Bombe is now located very close to the existing world-famous rebuild of Colossus that helped break the Lorenz cipher of German High Command during the Second World War. Together these two displays explore the ingenuity and inventiveness of the Second World War codebreakers — and the beginnings of our digital world.

The new Bombe Gallery will be officially opened this summer when the gallery refurbishment is complete.