You are here: Home » Who was The Ice King?

From award-winning director James Erskine (Sachin: A Billion Dreams, Battle of the Sexes) and producer Victoria Gregory (Shooting for Socrates, Senna) comes a new feature about the figure skating legend John Curry. Based on the book by Bill Jones and narrated by Freddie Fox, THE ICE KING is a searing documentary of a lost cultural icon, a story of art, sport, sexuality, and rebellion, releasing in cinemas across the UK and Ireland on 23 February 2018. 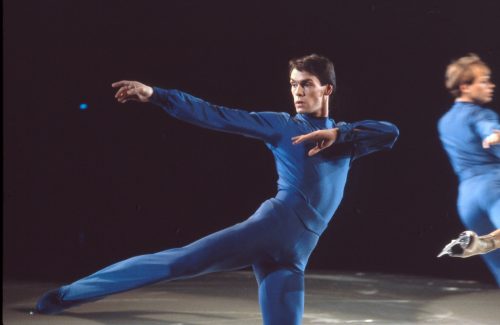 Watch any figure skating and it falls into two camps: before and after John Curry. From what was a macho, technical sport whose judges punished deviation, blossomed – through Curry’s stubborn beauty – ice-dancing. Featuring incredible unseen footage of some of his most remarkable performances, and with access to Curry’s letters and archive interviews, as well as contributions from former British skating champions Robin Cousins and Lorna Brown, legendary coach Christa Fassi, and interviews with his family, friends and collaborators, this is a portrait of the man who turned ice-skating from a dated sport into an exalted art form.

After winning gold at the Winter Olympics for a rebelliously balletic routine, audiences and reviewers alike were enthralled by his genius. Following his Olympic triumphs, Curry went on to defy expectations and to continuously redefine ice dancing as a true art form by pursuing his dream of forming his own company, which brought the sport to theatres and new audiences across the world. But Curry’s story is about more than skating. On the night of the Olympics final, Curry became the first openly gay Olympian at a time when homosexuality was barely legal. From bullying and prejudice, to relief in the gay underworld, to his untimely death from AIDS, Curry’s story dovetails with the experiences of a generation.

John Curry was no activist, but an artist expressing his authentic self – yet in a world where his existence was taboo, his life was unavoidably political.

James Erskine is an award-winning director, writer and producer. He is best known for his documentary work, having directed and produced award-winning documentary features including his Emmy-nominated The Human Face, the acclaimed Who Killed the Honey Bee?, One Night in Turin and Battle of the Sexes, which tells the story of the most watched tennis match ever between Billie Jean King and Bobby Riggs. Alongside his documentary work, James wrote and directed Shooting for Socrates following the Northern Irish football team at the 1986 World Cup and the London set thriller Healer, which premiered at the Raindance Film Festival in 2015. His most recent projects include the acclaimed Sachin: A Billion Dreams, and Le Mans: 3D.

The Ice King is back

Battle of the Sexes