You are here: Home » Thelma Schoonmaker to receive BAFTA Fellowship

The British Academy of Film and Television Arts will honour BAFTA and Oscar-winning editor Thelma Schoonmaker (Raging Bull, Goodfellas) with the Fellowship at the EE British Academy Film Awards on Sunday 10 February. 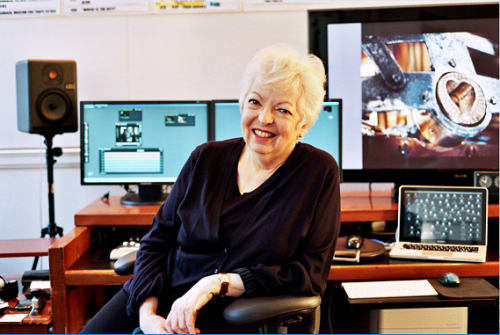 Thelma Schoonmaker said: “I am staggered to be asked to join such an illustrious group as the BAFTA Fellows and particularly moved and honoured to be joining two of the most important people in my life – my director, Martin Scorsese, and my late husband, Michael Powell (and his partner Emeric Pressburger) – all of whom have been given BAFTA Fellowships. The British Cinema has been a huge influence on Martin Scorsese and through his teachings on me, I am blessed to be able to help him with the continuing restoration of the Powell and Pressburger legacy. I give my deepest thanks to BAFTA for honouring that work and my work as Scorsese’s editor with this Fellowship.”

Amanda Berry OBE, Chief Executive of BAFTA, said: “We are thrilled to honour Thelma Schoonmaker with a BAFTA Fellowship, celebrating her career as one of the film industry’s most respected editors responsible for some of cinema’s most iconic and treasured moments.”

Thelma Schoonmaker’s acclaimed career has spanned over 50 years, and her celebrated partnership with Martin Scorsese has garnered nominations for nine BAFTA Awards, winning Best Editing in 1982 for Raging Bull, Goodfellas in 1991 and seven Academy Award nominations, winning the award for Raging Bull (1981), The Aviator (2005) and The Departed (2007).

Born in Algiers in 1940, Schoonmaker moved to the United States as a teenager and attended Cornell University, studying Political Science and Russian language. After graduating from Cornell in 1961, she began a course at Columbia University in Primitive Art. During this time Schoonmaker responded to an advertisement in The New York Times for a trainee assistant film editor and got the job. She then signed up for a brief six-week course in film-making at New York University, where she came into contact with a young filmmaker called Martin Scorsese after a professor asked that she could help him salvage the badly mangled negative of his student film; What’s a Nice Girl Like You Doing in a Place Like This? Subsequently in 1967 Schoonmaker went on to help Scorsese edit his first feature film Who’s That Knocking at My Door marking the beginning of an illustrious filmmaking partnership, which continues to this day over 50 years later.

Despite this early success the first part of Schoonmaker’s career was difficult; joining the Motion Picture Editors Guild in Los Angeles was challenging with Schoonmaker not meeting the entry requirements despite her Academy Award nomination, meaning she was unable to work in Los Angeles. Consequently, there was a twelve-year gap between her early work with Scorsese, until Raging Bull’s producer Irwin Winkler resolved the Guild issue so she could edit the film.

Schoonmaker’s partnership with Martin Scorsese continues with The Irishman which is set to be released by Netflix in 2019.

Schoonmaker was married to British filmmaker Michael Powell from 1984 until his death in 1990, and since Powell’s death she has worked tirelessly honouring his legacy and preserving the films of Powell & Pressburger.

The EE British Academy Film Awards take place on Sunday 10 February at the Royal Albert Hall. The ceremony will be hosted by Joanna Lumley and will be broadcast exclusively on BBC One and BBC One HD. The ceremony is also broadcast in all major territories around the world. On the night, www.bafta.org will feature red carpet highlights, photography and winner’s interviews, as well as dedicated coverage on its social channels