You are here: Home » Next generation of BAME creatives celebrated at B3 Media’s annual ‘Futures Showcase’ 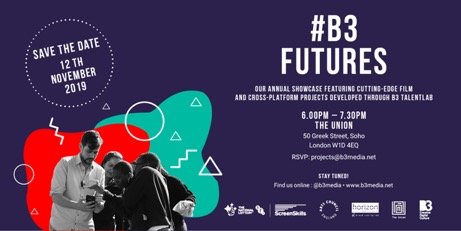 B3 Media is excited to announce that their annual Futures Creative Showcase will be taking place at Soho’s The Union Club, on 12th November. The event will showcase and celebrate the work of the finalists from their innovative BAME creative development programme TalentLab.

TalentLab is supported by ScreenSkills using National Lottery funds awarded by the BFI as part of the Future Film Skills programme.

TalentLab’s participants took part in 4 days of intensive workshops, Q&A sessions and one-to-one meetings with industry experts. They were able to learn about sound design, storytelling, creative entrepreneurship, virtual reality and much more to help them on their creative journey.

The cohort have since resubmitted their updated projects and the participants have been painstakingly whittled down to 9 finalists, who will go forward to have their work commissioned.

This year’s finalists are:

The Futures Creative Showcase gives the TalentLab finalists a unique opportunity to present their projects to an audience of industry experts, creative professionals & film makers.

Following the presentations at the showcase, there will be informal networking drinks where attendees have the chance to connect with the exciting group of filmmakers, artists and storytellers who are on their journey to becoming some of the best creatives in the country.

The selected filmmakers and artists will receive mentorship and development support from industry experts and creative practitioners.

Hear what some of the 2019 cohort thought of TalentLab!
Past TalentLab alumni have gone on to develop thriving creative careers, win accolades and awards, and create incredible projects. Participants have received BAFTA nominations; won prestigious awards for projects developed during the programme, as well as go on to have their work shown at Cannes, Sundance, and other key film festivals.

Some standout TalentLab Alumni include:

Marc Boothe, Founder/ Creative Director of B3 Media, says: “At B3, our passion is finding, growing and showcasing creative talent with fresh stories that have yet to be told. We focus on developing creative leaders from diverse communities who have something to say whether it’s by way of short, feature, or transmedia art forms. It’s exciting to find and ignite talented storytellers who will blaze the trail for years to come.”

Want to take your film career to the next level?