You are here: Home » Joan Jett opens up 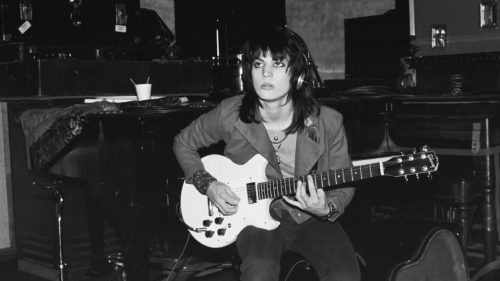 From director Kevin Kerslake (Bob Marley Legend Remixed, As I AM: The Life and Times of DJ AM and Nirvana’s Come As You Are music video) comes a celebration of Joan Jett, the Godmother of Punk Rock.

BAD REPUTATION is an electrifying documentary about how a strong-willed musician became a cultural icon and a trailblazer for women in the arts and the world over. The film will be coming to cinemas across the UK and Ireland on 26 October 2018 and will have its UK Premiere at the BFI London Film Festival on 12 and 13 October.

Jett became mega-famous from the number-one hit ‘I Love Rock n Roll’ but that’s only part of the story. That fame intensified with the music video’s endless play on MTV, world tours and countless further hits including ‘I Hate Myself for Loving You’ – but that staple of popularity cannot properly define a musician.

Jett put her hard work in long before, ripping it up onstage as the backbone of the hard-rock legends The Runaways, starting her record label out of the trunk of a car after being rejected by 23 producers, and influencing many musicians — both her cohort of punk rockers and generations of younger bands — with her no-bullshit style.

They Shall Not Grow Old at the BFI Southbank