You are here: Home » 10 Films that went Nuclear 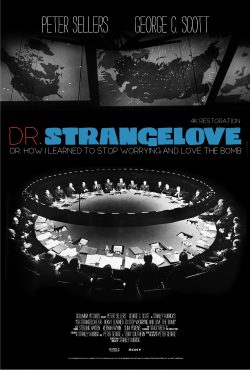 The BFI’s Kubrick season has launched and the upcoming 4K Restoration re-release of his dark comedy Dr Strangelove or: How I Learned To Stop Worrying and Love The Bomb will be coming to UK cinemas from 17th May. To celebrate the opportunity to see this classic on the big screen again, we have created a list of 10 films that deal with a nuclear crisis.

Accompanying the cult classic will be a newly commissioned short film by Director Matt Wells ‘Stanley Kubrick Considers the Bomb’, which dives expertly into how the Director responded to society’s widespread concern about nuclear war at the time and transformed it into his irreverent comic masterpiece. Featuring contributions from those who knew Kubrick best, including his daughter Katharina Kubrick (location photographer and props buyer for The Shining & Eyes Wide Shut), Jan Harlan (Kubrick’s Executive Producer and brother-in-law) and journalist and author Eric Schlosser, it’s definitely not one to miss.

As a token of our excitement for the 4K restoration re-release, we’ve selected ‘10 Films that went Nuclear’.

Director: Dan Trachtenberg
Starring: John Goodman, Mary Elizabeth Winstead, John Gallagher Jr., Douglas M. Griffin
Synopsis: After getting in a car accident, a woman is held in a shelter with two men, who claim the outside world is affected by a widespread chemical attack.

The world is beset by the appearance of monstrous creatures, but one of them may be the only one who can save humanity.

In a dangerous post-apocalyptic world, an ailing father defends his son as they slowly travel to the sea.