You are here: Home » Cameron Britton takes Mindhunter by storm 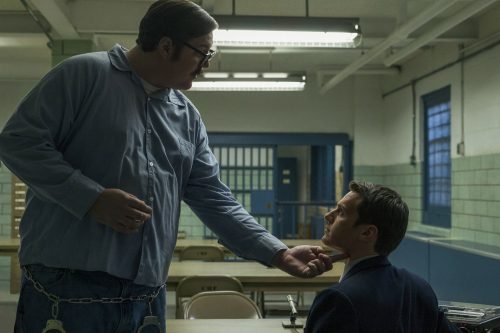 With a second season already confirmed, Mindhunter is going from strength to strength.  Netflix has sent over a great tweet they made celebrating Cameron Britton’s superb portrayal of Ed Kemper.

MINDHUNTER follows ambitious FBI agent Holden Ford as he struggles to comprehend incarcerated killers, so that he might use this knowledge to catch others.

He’s teamed with experienced agent Bill Tench in the Behavioral Science Unit and will work with his sometimes reluctant partner to find new methods of investigation.

Together they will meet some of America’s gravest killers – and face the cynicism and scorn of the tradition-bound hierarchy of the 1970s’ Federal Bureau of Investigation.

Ford will risk empathizing with ‘evil’ in order to save lives. But, as Tench says, when arguing the case for their work: “How do we get ahead of crazy if we don’t know how crazy thinks?”

Mindhunter has a new trailer