You are here: Home » In The Shadows starts production 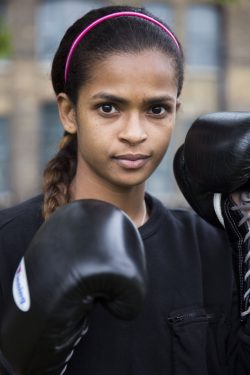 BAFTA award-winning and Academy Award nominated producer Lee Magiday (THE FAVOURITE, THE LOBSTER), under her newly founded production company Sleeper Films and Madeleine Sanderson (BEING AP, FIGHTING FOR A CITY) of Curate Films, are set to produce the feature film IN THE SHADOWS, it was announced today.

IN THE SHADOWS is based on the remarkable and inspiring true life story of Somali-born boxer Ramla Ali and her perseverance and passion to become a boxing champion against all odds.

As a young girl, Ali fled Somalia with her family, seeking asylum in London from the Civil War. Ali discovered her passion for boxing as a teenager and courageously pursued this in secret, knowing her family would disapprove. Her dedication and determination led her to win the England Novice National Championship, the Elite National Championships and the Great British Championships, becoming the first ever British female Muslim boxing champion.

Now with full support and blessing from her family, Ali is training to become the first boxer to represent Somalia in the 2020 Olympic Games. She is currently the African zone Featherweight Champion and is an exclusive global Athlete for Nike. She was selected as one of 15 women to appear in 2019 British Vogue’s September cover issue feature titled, “Forces for Change,” guest edited by The Duchess of Sussex, Meghan Markle.

Anthony Wonke said: “I first met Ramla and was immediately struck by how inspirational, relevant and important her journey is in our world today. I want to make a film that will be highly intimate, steeped in contemporary mores that explores the fascinating shades of belief, gender, love, race, religion and identity. For me, this is the story of a modern-day heroine. I’m thrilled to be working with such strong producers as Lee Magiday and Madeleine Sanderson backed by Film4.”

Magiday and Sanderson said: “Ramla’s story is current, vital and timeless and captures the deepest wish within us all to forge our own paths and be supported by those we love the most. Her passion and ambition to inspire and empower young Muslim women to believe in themselves and follow their dreams is amazing to witness. Anthony’s combination as a filmmaker to be both bold and sensitive, ambitious and nuanced, will make this a very powerful and special film which we are honoured and excited to bring to the screen.”

Wonke is a prolific documentary filmmaker who has directed and produced both feature length film and television documentaries. His most recent credits include HBO and Channel 4’s THE HUNT FOR JIHADI JOHN, Disney’s THE DIRECTOR AND THE JEDI, Universal Pictures’ RONALDO about professional footballer Cristiano Ronaldo produced by Asif Kapadia and BBC Films’ BEING AP, which tells the story of jump jockey AP McCoy. Wonke has won multiple awards including a BAFTA TV and International Emmy Award for Channel 4’s documentary special, SYRIA: CHILDREN ON THE FRONTLINE, a BAFTA TV Award for BBC’s eight-part series THE TOWER: A TALE OF TWO CITIES and a BAFTA Scotland Award for BBC’s FIRE IN THE NIGHT. He’s also an Oscar nominated and Emmy winning executive producer.