You are here: Home » Take the Universal Soldier home 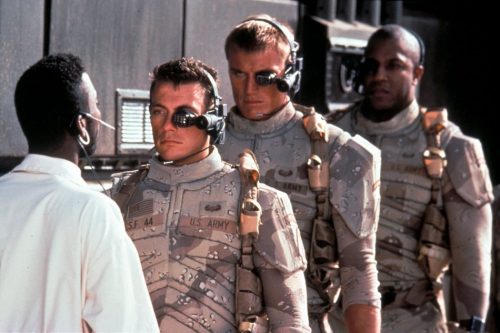 Starring the “Muscles from Brussels” Jean-Claude van Damme and Swedish one-man army Dolph Lundgren, pitted against each other in a mortal cyborg combat, UNIVERSAL SOLDIER is directed by Academy Award-winning director Roland Emmerich who delivers a futuristic, gladiatorial epic, with non-stop large-scale action.

During the Vietnam War, soldier Luc Deveraux finds that his superior officer, Andrew Scott, has become violently deranged, and the two fight to the death. After their bodies are retrieved, they are placed in a secret US government program in which they are reanimated, using genetic engineering, and trained to become unquestioning killing machines for the UniSol counter-terrorist program. The Universal Soldiers dispatch their targets with no pangs of conscience or memory of the act – the ultimate crisis response force.

Their success is overwhelming, but the experiment gets out of hand when the two soldiers start to regain their memories. Glimpses of their pasts start to return, rekindling their intense conflict and need for an ultimate reckoning, with no regard for the collateral damage that ensues.

For the very first time, UNIVERSAL SOLDIER will be available in 4K Ultra HD including Dolby Vision® HDR, a stunning format offering four times the resolution of full HD to bring entertainment to life through ultra-vivid picture quality. When compared to a standard picture, Dolby Vision can deliver spectacular colours never before seen on a screen, highlights that are up to 40 times brighter, and blacks that are 10 times darker.